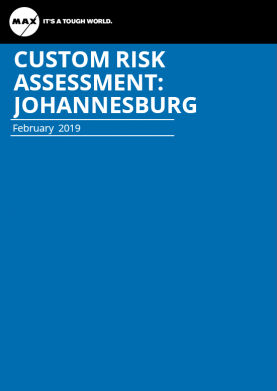 South Africa faces a range of political and security risks leading into the May 2019 general elections and continuing difficulties in overcoming economic and governance challenges. This fuels civil unrest across the country, as service delivery failures as well as a robust labor union culture lead to repeated demonstrations in urban centers, though the more violent of these protests are generally in informal settlements and townships while other central areas of Johannesburg typically see significant disruptions to travel.

As is the case across the country, the primary threat in Johannesburg is crime, which affects even affluent areas where there are assaults and robberies, which can be violent and assailants often carry weapons, as well. Moreover, a major focal point for this is OR Tambo International Airport, where travelers are often targeted for robberies as they depart the airport premises. As a whole, there are risks associated with road travel and efforts must be taken to mitigate the threat of robbery while driving. There remains a minor but growing concern of militancy, with notable militant attacks taking place in the Durban area, though Johannesburg may be vulnerable to “lone-wolf” attacks as well. Anti-Western sentiment is a concern in its connection to anti-white sentiment, which is common in the country, though in Johannesburg this would likely only manifest as verbal insults rather than violence.